I think I always thought it was a harder process than it is. I figured you needed fancy equipment and you probably had to soak things for 72 hours and add tahini which I never seem to have on hand.

Here in Quito, nut butters are a rare thing. A very small jar of peanut butter is more than $5, and almond butter is nowhere to be found. I figured now was as good a time as any to conquer the nut butter, and guess what I soon realized?

Surprise! It’s the easiest thing ever!

It helped that Laura and I had seen a demo run by the ladies behind DIY Vegan at the Toronto Veg Food Fest. They made almond butter from scratch in less than ten minutes, and my eyes were finally opened. Now, in the center of my kitchen table are two little jars full of peanut butter and almond butter, made as cheaply and easily as can be.

Do you want the “recipe”?

Okay. Toast your nuts in a pan on low heat for about five minutes, making sure not to burn them. This gives your finished nut butter a deeper, richer taste – really delicious. Add them to a food processor or blender, and blend on high for a minute or two. Stop, scrape down the sides, and repeat. The heat from the processor will start to release the natural oils from the nuts and create a smooth paste. Continue to stop and scrape the sides until it’s totally smooth. Add salt to taste, and you’re done!

For the peanut butter, it was very much the same process, save the slightly tedious step of removing the skins of the peanuts. One way to make that step faster is to rub the nuts inside a tea towel to help the skins come off more easily.

Once the butter is at a consistency you like, scrape it into a little recycled jar – ours used to hold store-bought guacamole! If you’re a fan of crunchy nut butters, remove about a 1/4 cup of nuts from the food processor at the beginning, after giving them a quick pulse to chop them up, and stir it back in at the end.

And there you are! Easy, delicious, and so inexpensive. Our peanut butter cost us exactly 60 cents to make, since a bag of raw peanuts in their skins was 1.20 at our local grocery store. The almond butter would be a little bit more, but still so cost-effective compared to buying it made! Plus, you get to avoid excess sugar, preservatives, and other chemicals.

From one green guinea pig to another, this will be the easiest thing you do all week. I hope you enjoy!

Welcome to Guinea Pigging Green! Our podcast and blog feature real talk on health, wellness, and eco-friendliness (in a fun and approachable way).

New to our site? Start here!

Want to be interviewed on the podcast? Apply here! 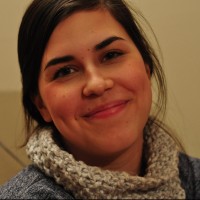